Welcome to this series of guest blogs as part of our Everyone’s Exeter campaign, focusing on one of the 12 Goals each month over the next year. We will be hearing from business leaders on the impact that the featured goal of the month will have on their business and what their organisations are already doing to tackle the goal.

We are joined this month, for the Clean Air for Exeter goal, by Mark Roberts, the CEO and Founder of Lightfoot.

My name is Mark Roberts, I’m the founder and CEO of Lightfoot.

Before Lightfoot, I worked on hybrid drivetrains and van conversions. One challenge with a particular client actually helped us create Lightfoot. We delivered top-of-the-range vans but the client saw barely any change in efficiency. It took a while for us to work out, but the problem wasn’t mechanical – it was human. A vehicle will only ever be as efficient as the person driving it!

So, we created Lightfoot to help drivers become more efficient. Once we had the results verified by the University of Bath, we knew we were on to a winner. Drivers who use Lightfoot cause up to 20% less pollution. That’s how we want to contribute to Clean Air for Exeter – by helping drivers reduce their impact as we travel the long path to removing ICE (internal combustion engine) vehicles from our roads. 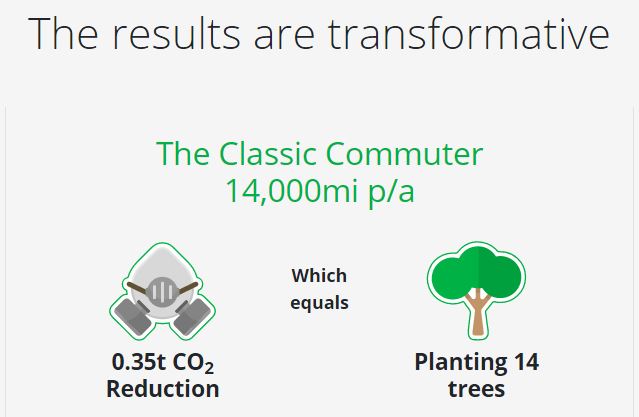 We don’t need a few people being perfectly sustainable, we need millions of people doing it imperfectly.

Addressing climate collapse and air pollution is a Herculean task.

There are as many views on how we solve these issues as there are causes for them, but where we do find unanimity is in our understanding that we need to take action immediately, however we can, if we want to protect the living world.

This is the driving force behind community initiatives that are cropping up across the country, from seed bombing and tree planting to increases in cycle use almost every year since in the last decade. People are aware that we don’t have time to wait for government policy – which is not to say there aren’t good ideas coming out of Westminster, but policy is inherently slow-moving – and are instead looking at the changes that can be made at a local level to start the long journey towards a sustainable future.

We can do things now; as individuals, as business owners, as members of our communities, that can engender the shift in behaviour and thinking that will protect future generations and the natural world. You or I won’t save the world by recycling or taking part in Meatless Monday, but millions of us together can make a significant impact on the health of our planet whilst we wait for those silver bullet policies to be enacted.

This is the space from which the Breathe Exeter initiative first grew. A local business, eager to make a difference and with the means to make it a reality, looking to affect change at a local level. Breathe Exeter embodies Lightfoot’s, and CEO Mark Roberts’, desire to inspire people-led change across the UK, bridging the gap between our current reality and a utopian green future.

Breathe Exeter has enjoyed an incredibly positive reception across the city, however we think it’s really important that we address the few concerns that have been raised. So, let’s do just that.

Yep – this is a driving movement

Breathe Exeter is about addressing our driving behaviour. Not about cycling, not about using public transport, not about driving electric cars.

Because the majority of people aren’t doing those things.

We wish they were. We wish it was different. But we know that it isn’t right now. So, we’re trying to do something realistic to address this monstrous contributor to air pollution.

We fully support Exeter City Council and Exeter City Futures’ plan to make Exeter a carbon neutral city by 2030. The vision to develop active and public transport networks in the city is ambitious, world-leading, and incredibly exciting, but traffic in the city won’t disappear overnight. Whilst we are waiting for these amazing infrastructure developments, thousands upon thousands of vehicles will still be contributing to pollution hotspots every day.

It seems backwards at first – if we want cleaner air and safer roads, why would we reward drivers?

The distinction is that we reward better drivers. The ones who acknowledge driving is harmful, who want to make a difference, but can’t cycle every journey or afford an electric car.

We want to encourage small changes – improvements in behaviour and shifts in thinking – that will make the movement towards a genuinely sustainable future smoother and easier to manage.

Gamification is a hugely effective motivator for behavioural change. The principles that make Lightfoot so successful are just as easily applied to encouraging other beneficial behaviours – e.g. cycling, walking, lift-sharing. This is something Lightfoot and its partners are working on and will help to encourage Exeter’s communities towards a seamless transition into a smarter, sustainable city.

So, yes, Breathe Exeter isn’t telling anyone to give up their car or putting pressure on diesel drivers. There are lots of organisations and movements doing that already.

It’s telling people who care that they can make a difference, no matter their circumstances or needs.

That is the goal of Breathe Exeter – to get individuals and communities taking positive steps together that put us on the path to the greater changes we need, filling the gap between increasing awareness and significant action. We’re eagerly awaiting the day when Exeter has zero privately-owned vehicles on its roads – the day when we can reward citizens for using the amazing public and active transport networks that are being developed in our city.

Whilst we wait for that day to come, we’re offering a solution that allows us all to reduce our impact now.

We won’t transition to an entirely new culture, a new view of the world, in an instant. As we tread the unmapped path towards a new era of responsibility and our place within it; we need kindness, not rejection. We need understanding, not doubt. We all need to do our bit – even if it isn’t as much as the next person.

Environmental issues and the climate crisis are emotive topics. We are all trying to play our part in protecting the living world and there are innumerable ways of doing it. Some people are cutting down on plastic, others are gluing themselves to the doors of the London Stock Exchange. It isn’t all or nothing.

It’s easy to criticise the way others practice sustainability (it can be pretty fun, too), but would we be better directing this passion elsewhere? Can we promote solutions without denigrating others? Can we look at the good people are trying to do and appreciate that it’s a step in the right direction?

That’s where we are with Breathe Exeter – we love the work being conducted by Exeter City Futures, Exeter City Council, and their many partners and are giddy at the thought of a carbon-neutral Exeter. We also are going to keep on encouraging drivers to make small changes whilst they save for their electric vehicle or move to a new job with a cyclable commute.

Our city has a bright future. Breathe Exeter is one of the many steps we will take to realise it.