Expanding on from the previous blog in the data series, ‘Data Mills Explained’, I am going to explore more about how data can be valuable and if utilised can enrich citizens lives, back up better decision making in cities, and make people more engaged and aware of the potential data has to make change.

Is data the new oil?

You may have heard data being referred to as ‘the new oil’. It’s a phrase that is being thrown about a lot in the more recent years, as the value of data is starting to become more widely recognised. It is clear that within lots of this data are the answers needed for developing long-term solutions to big city challenges. This is why data is driving the fourth industrial revolution in the same way that oil drove the second industrial revolution.

With global data economically pegged at 3 trillion euros, and the European commission valuing personal data at being worth 1 trillion euros by 2020 (almost 8% of the EU GDP), this comparison to oil should be quite understandable – and a pretty big indicator as to how valuable data is.

It is currently estimated that the world produces 2.5 million terabytes of data a day. To put that into perspective, if this were a single SD video, it would be around 28 thousand years long!

It can be difficult to visualise this type of scale, so our friends at the Met Office Informatics Lab created this photo to put this into perspective. Note that we are now in the second to last box (4E) on this picture. That’s a lot of 1s and 0s! 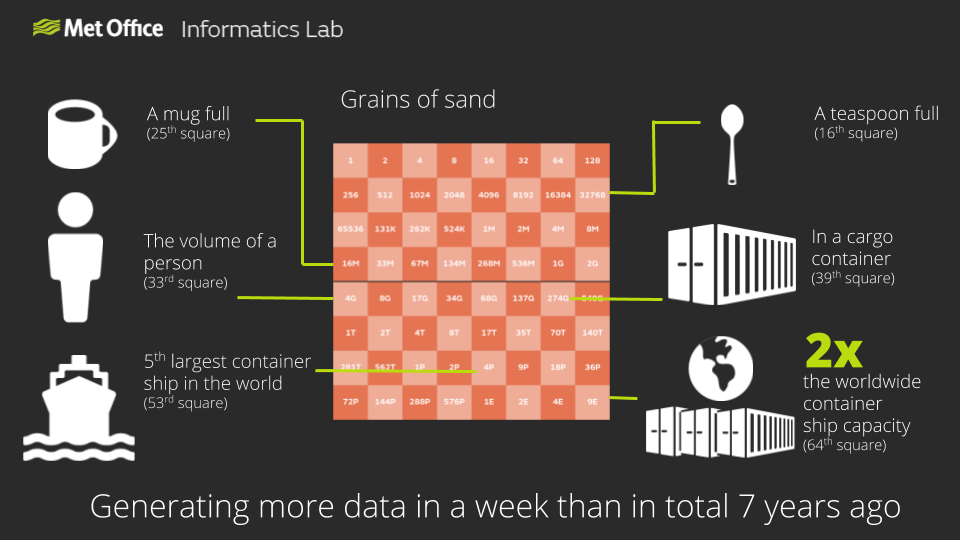 Check them out here

So with this in mind, according to Statista 7 out of the top 10 companies by market value make the majority of their income from data, compared to only 1 out of the top 10 making its money from oil. This definitely supports the idea that data has replaced fossil fuels as the cornerstone for a thriving digital economy. The benefits of treating data as infrastructure are becoming increasingly clear. Businesses that invest in data will therefore be at an advantage, as we are in a fourth industrial revolution that is heavily reliant upon data to improve businesses, services, and cities.

As a result of this data being valuable, it unfortunately becomes a target for people wanting to exploit it. There have been a few examples in previous years of the cost of a data breach. Consumer credit reporting agency ‘Equifax’ had a data breach of 143 million users and as a result faced a lawsuit of up to $70 billion, and another insurance company in the US in 2015 compensated 75,000 users with $100 per person as the result of a data breach.

Data has also been quoted as ‘more valuable when used than simply hoarded’. As a result of the high cash value of data, it is very easy for companies to hoard and sit on data and to not do anything with it, as they perceive it to be valuable. However, as cities are realising the potential of data, lots of institutions, companies, and people are sharing and opening their data for the benefit of everyone. From this, the Exeter Data Mill was created as a ‘one stop shop’ for data, with the hope that it can bring the understanding that can help seek the right services and infrastructure to support Exeter as it grows. This means using data and analytics to drive decision making. Open data can also serve as a way to highlight areas that governments can improve and identify gaps and current service provisions. The European commission similarly use an ‘Urban Data Platform’ – a helpful platform facilitating data sharing and research across the European Union. This can be found here!

Data as an Asset

Managed well, data is a useful asset that can be applied to anything, no matter what the desired outcome may be. It can really help businesses innovate and grow, help governments develop and tackle solutions to potential problems, or even just be of interest to the everyday person.

With the knowledge that 90% of all data has been produced in the last 2 years, it is clear that within city data are the answers needed for developing long-term solutions to tackle issues, make change, and to make better decisions about the way we live our lives and build our cities. Comprehensive and competitive analytics can help to provide insight into the workings of cities.

A good example of how data can be a useful asset is Spotify. Artists and bands that use Spotify have access to data, allowing them to view things like their most popular songs, who and when people are listening to their music, and as a result can make better decisions like when to tour, the audience they’re directing their music towards, and other artists to collaborate with.

However, many argue that there is more value and use to data, once combined with other data, than on its own. This is the idea that the more data there is, the more valuable it becomes as an asset.

Now you know how useful and valuable data can be, do you think the Exeter Data Mill is lacking in any data sets? Let us know what you want to see!