A word from Exeter City Futures…

We are extremely pleased to read the University of Exeter’s ‘Environment and Climate Emergency Working Group White Paper’ in response to the city’s climate emergency and carbon neutral ambitions. It is positive to see that the University of Exeter has recognised that the best place to start making a difference is by refining its own operations – what a great message to send to the city.

This is the second commitment from an Exeter City Futures member organisation, after Exeter City Council, to make its direct, and indirect, operations carbon neutral.

As stated in our Towards a Carbon Neutral Exeter report released earlier this year, we aim to support our other board member organisations (Royal Devon & NHS Foundation Trust, Exeter College, Global City Futures, Devon County Council and Exeter City Council) identify areas where immediate action can be taken and will encourage each member to draft their own plans for carbon neutrality.

The University of Exeter must take rapid action to tackle the environment and climate emergency, according to a panel of staff and students.

The panel says the university should be carbon neutral by 2040 in terms of activities it directly controls (such as university vehicles and campus electricity) and by 2050 – or sooner – in indirect emissions (such as those associated with waste and products purchased).

Its recommendations include cutting long-haul air travel by 50%, increasing recycling to 70% and halving plastic and paper use – all by 2025.

The group, led by Professor Juliet Osborne, was set up when the university declared an environment and climate emergency earlier this year.

Staff and student engagement sessions are now taking place, and the Vice-Chancellor’s Executive Group has agreed to set up an Environmental Emergency Board which will meet before the end of the year and agree a delivery plan from January 2020.

“We have recommended targets to reduce the university’s carbon emissions and improve the environment.

“We present a wide range of recommendations to meet these targets, which require change across every aspect of university business: including infrastructure, strategy and culture.”

The report says the university should: 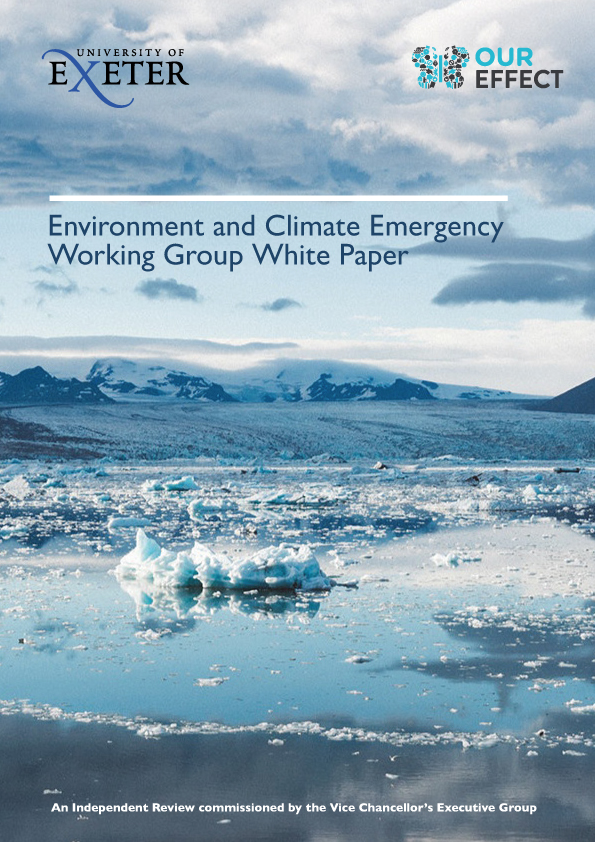 “The environment and climate emergency is undoubtedly one of the critical issues of our time and a significant priority for the University of Exeter in terms of our research, education and global strategies,”

said Sir Steve Smith, Vice-Chancellor of the University of Exeter.

“I am clear that to achieve all the goals and recommendations in this report, we need to engage our 28,000-strong community of students and staff to make the fundamental changes required.

“The senior leadership team can immediately support a good proportion of the goals and recommendations, but there are also areas that will need further work, particularly where there are major financial or structural implications.”

The recommendations to receive immediate support include: