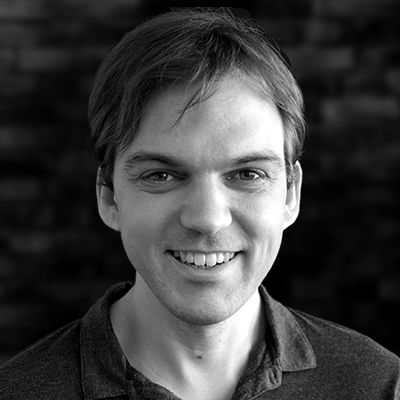 As Creative Lead at Exeter City Futures it is my job to produce a wide range of content that both communicates our vision and engages stakeholders in helping to develop solutions to the challenges Exeter faces. Last year I was asked to investigate how we could create a Minecraft map of Exeter generated from open data as a resource for citizens.

Having worked with the Royal Albert Memorial Museum on engaging young people with historic Minecraft maps of Exeter it seemed like the perfect opportunity to develop a similar project that could result in a collaborative vision of Exeter’s future, in a way which draws a direct link to its history of urban planning – right back to its Roman roots. I was excited by the accessibility of Minecraft and its potential to bring together a wide range of citizens who might not normally work together.

A big part of the Exeter City Futures approach to change is the creation of an analytical city where young people have the tools and knowledge to explore the power of data, and enabling those young people to analyse and create change for the Exeter region.

Minecraft can be used as a tool to engage young people with data, urban planning, and testing solutions to key city challenges like those faced by Exeter. The game’s accessibility means it’s easy for anyone to create virtual cities, but when combined with maps generated from open data becomes a powerful and inclusive platform for redesigning real places in a meaningful way.

The Exeter 2025 Minecraft Challenge is a project that seeks to engage young people, and any interested citizens, in shaping the future of their city using Minecraft as an innovative tool for inclusive and accessible urban planning.

On February March 7th Exeter City Futures held its first Exeter Minecraft Meetup in order to gather feedback that will help shape the Exeter 2025 Minecraft Challenge and get to know the local Minecraft Community.

Maps of Exeter tell a story about how it developed, and why it is the way it is, as well as historic visions of the city’s future like Exeter Phoenix. At the meetup I shared projects which inspired the challenge including the Minecraft Maps of historic Exeter created by the Royal Albert Memorial Museum in partnership with Wizard Keen, The Common People, and Blockworks. 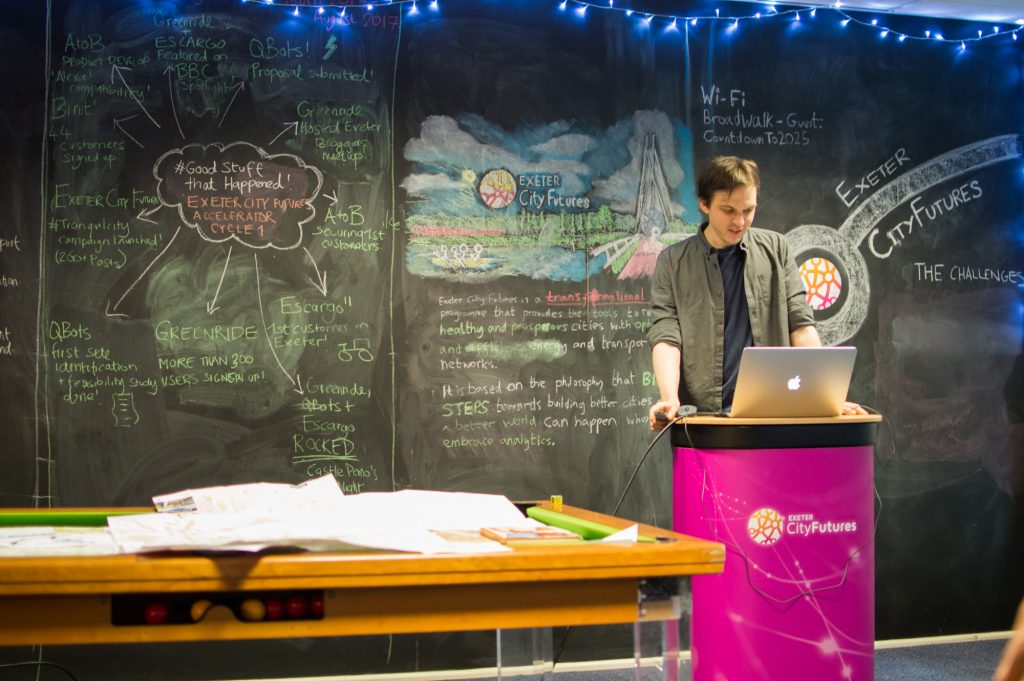 The Minecraft Challenge is not only an opportunity to create a collaborative vision of the future city, but also to position Exeter as a city which has used data and community co-creation to consider its urbanisation challenges and work towards meeting the UN’s sustainable development goals. There are already great examples of Minecraft being used by the UN as an urban planning tool to engage communities around the globe, such as the M-Ward project in Mumbai.

During the evening, guest speaker Christopher Gutteridge spoke about the history of Geocraft – a piece of software he created that can generate Minecraft Maps from Open Street Data and LIDAR scans, and which will be used as a basis for the Exeter 2025 Minecraft Challenge. In his day job Christopher built and manages the University of Southampton’s Open Data portal and is part of the University’s IT Innovation Team. 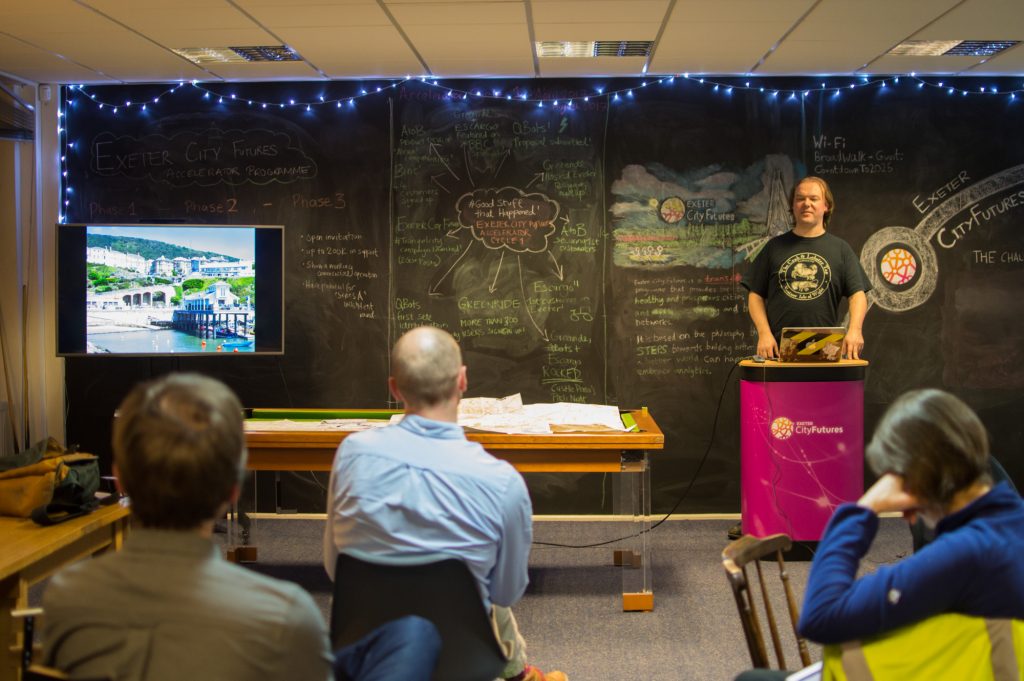 Christopher explained how Geocraft grew out of a hand-crafted recreation of the town of Ventnor to software that automatically generated maps of cities from Open Data. He also looked at other work he’s done mapping areas for the archaeology department at the University of Southampton and gave a tour of the things people can do with Minecraft and maps.

In addition to introducing the project and refining its scope the event helped me to understand how engaged young Minecrafters in the region might be with the project. Young Minecrafter Eddie, and Lucy Knight, Open Data Lead at Devon County Council, helped to confirm the idea that it would be a successful way of getting young people to engage in designing future Exeter.

Lucy shared examples of Minecraft maps that she has been creating by engaging with schools in Plymouth. Her work has demonstrated that if you give young people Minecraft maps of places they know like schools, and leave them to build unsupervised, the results can be unexpected and impressive. Her work has been inspired by Plymouth3, a project to collaboratively recreate the whole of Plymouth as it is now. 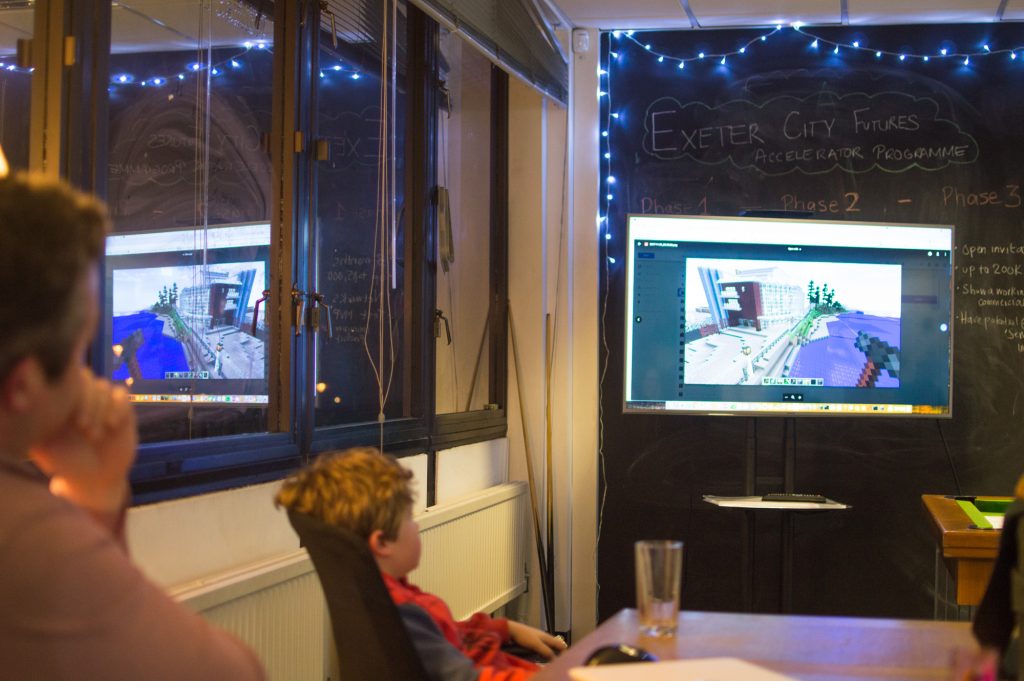 This idea was reinforced with a presentation given by young Minecrafter Eddie, who shared a vision for a concert hall he’d like to see in Exeter – inspired by a changing and evolving city. As Lucy suggested Eddie’s response was made on his own initiative following the announcement of the meetup, without any input from Exeter City Futures. He guided us through the glass-roofed structure which would offer a much needed large concert space in the city centre. 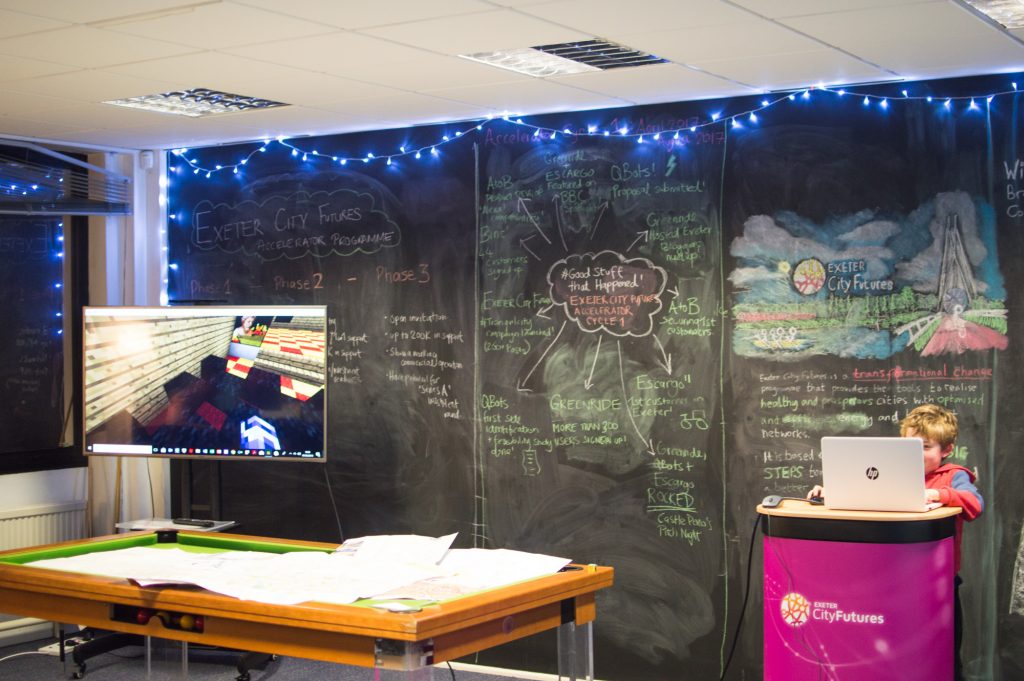 Feedback from all attendees at the event has been useful in shaping the Exeter 2025 Minecraft Challenge which will launch this spring. Attendees were asked to think about the best size for the map, how they might like to get involved, and possible applications of open data other than generating the maps.

The suggestions received have already impacted the scope of the project, and point towards ways in which we can make it more engaging. I am now preparing for the launch of the Exeter 2025 Challenge which I look forward to sharing more details on soon. Building up to the launch we are looking to engage with anyone who’s interested in how they’d like to get involved. Initially we’re seeking volunteers to work with me to build the final version of the map, but suggestions are welcome from anyone who thinks they can add something to the project.

To find out more about the Exeter 2025 Minecraft Challenge, get involved, and receive updates follow the link below.