Despite the recent and unprecedented COVID-19 pandemic, today marks the release of Exeter City Futures’ ‘Plan for a Net Zero Exeter’, demonstrating that Exeter’s determination to become carbon neutral by 2030 remains of paramount importance.

The Plan sets out a series of practical actions that local authorities, organisations and individuals can take, with associated carbon savings and cost, all of which Exeter will need to put in place in order to become net-zero carbon. 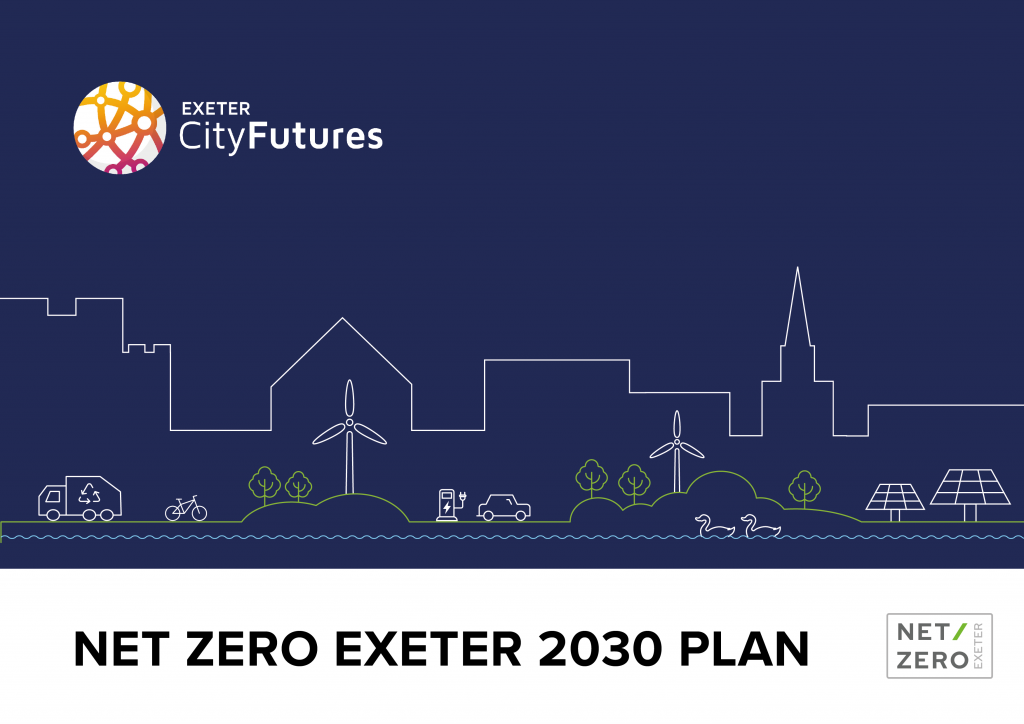 The plan is built on the understanding that success will only be achieved through a genuinely collective effort from everyone, to ensure Exeter remains one of the greatest places to live in the UK.

Whilst the formal launch of this document was due to take place at the Net Zero Exeter Mobilisation Summit, which had to be postponed as a result of COVID-19, Exeter City Futures has kept to its commitment to producing the Plan and has now presented it to the City Council.

A formal endorsement of this Plan by Exeter City Council is expected to be delayed whilst the local authorities, organisations and individuals deal with the continuing impact of COVID-19, which understandably has to take priority.

However, it can be said that the Plan for a Net Zero Exeter has never been more relevant. This crisis is forcing us to reassess our lifestyles, change the ways we work, and even shift our values. This provides a unique opportunity to take the learnings from our current challenging situation, and isolation, and turn it into creative, positive, practical action – ready for when society can return to some sense of normality.

“Despite the unprecedented coronavirus pandemic, I’m extremely pleased to present the Net Zero Exeter Plan to Exeter City Council and the city, on how Exeter can be carbon neutral by 2030.”

“It has been four years in the making with collaboration with the many different communities, institutions, organisations and individuals who make up our city.”

“Everyone across Exeter has a role to play, this isn’t something that can be delivered by any local authority alone.”

“This plan represents the contribution of hundreds of businesses and individuals across Exeter, who have engaged with us to set out the action plan to become a carbon-neutral city and ensure it remains one of the best places to live in the UK.”

“Many businesses and individuals are now struggling to deal with the impacts of COVID-19 and this is likely to change the way the city views and responds to the plan.”

“More than ever the city needs to come together to think about the kind of future that we really want, and make it a reality.”

Exeter City Futures has a duty to explore and learn how people view the plan in light of the current climate.  So, with the nation in lockdown, Exeter City Futures will be working over the next few months to develop ways in which people, whether as individuals, or as representatives of businesses, clubs, communities or institutions, can continue to play their part in the city’s ambition to become net zero.

This is the first iteration of the Net Zero Exeter Plan, curated through extensive engagement across the city, and is intended to be in constant review. It will be refreshed towards the end of 2020 to reflect on the position of the city as a result of the coronavirus, and then annually as the city begins to mobilise projects and action that feed into Exeter’s carbon ambitions.

The launching of the plan is the final work of the current Managing Director, Liz O’Driscoll, who leaves Exeter City Futures after more than 4 years’ service.

During Liz’s time with ECF, she has been involved in a number of initiatives including: