Exeter Aims to be a Carbon-neutral City by 2030

Exeter will strive to become a carbon-neutral city in just over a decade in an ambitious new vision adopted by the City Council.

Councillors recently backed a motion recognising the scale and urgency of the global challenge from climate change, and accepted that the City has a duty to act “quickly, collectively and concertedly” to avoid the worst of the predicted outcomes.

The bold commitment was made today (Friday 15 March) on a day of environmental protests across the country. Cllr Rachel Sutton, Lead Councillor with responsibility for the Low Carbon Task Force and Exeter City Futures, met with protesters outside the Civic Centre to explain the work taking place across the city. 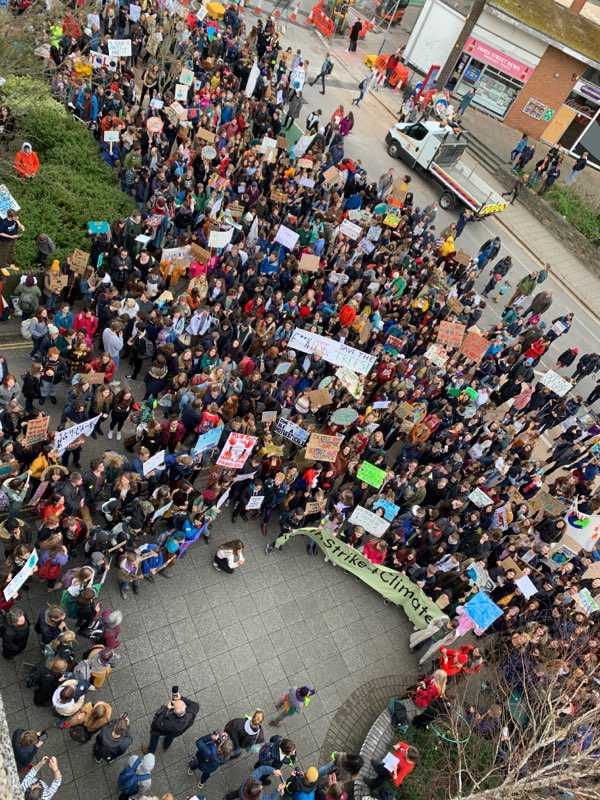 The motion recognises that the City has been playing a role in rising to the critical climate change challenge for some time.

The City Council is strongly committed to renewable energy and playing a part in pushing the boundaries of what local authorities can do to deliver a low carbon future.

Over the past decade it has pioneered Passivhaus standards in the UK, delivered large-scale district heating networks and reduced its own energy consumption by more than a third. The City Council is already on track to deliver an energy-neutral council by 2022.

“By declaring commitment to make Exeter Carbon-Neutral by 2030, our city can make a vital contribution to our planet and all its people. Such an ambition is aligned to our vision and could be transformative for our city. This council believes that, with the right partnerships in place, Exeter has the opportunity to show leadership among cities by adopting the game-changing ambition of becoming a carbon neutral city by 2030.”

Exeter already has a world-class reputation in climate and environmental research, with the Met Office and University of Exeter informing the international response to climate change. The city has an ambition to be the world-leader in applied environmental science, health and data analytics, and in addressing the challenges of climate change and urbanisation.

The motion, backed by councillors, recognises that there are limitations that will impact the speed and effectiveness of this vision given unstable and ever-changing commitments of government support. It calls for a coordinated approach and action at local, regional, national and global levels to address the challenge of carbon emissions and energy use in cities.

“We welcome the city council’s commitment to make Exeter carbon neutral in 10 years. This is an incredibly positive message to send to the residents of this great city and it aligns with our new Everyone’s Exeter Campaign“

“These are bold, but critical targets, and everyone across the City will need to be involved in making the changes we need. With this announcement Exeter joins other leading UK cities working towards this global aspiration and we believe that through Exeter City Futures we have the commitment and collaboration to work together to make it a reality.”