New Board for a Net Zero Future

Exeter City Futures have a net-zero-mission to collaborate across the city, from individuals, communities to large organisations. We partner with the University of Exeter, its staff and students, with local authorities and the citizens and neighbourhoods they represent.

While the University of Exeter has been represented on the board of Exeter City Futures since 2016, this month we are welcoming Vice-Chancellor Professor Lisa Roberts as a Director. The University has over 1000 research and education specialists working on the environment and climate with leading global institutes working in partnership with a wider range of organisations on solutions to the climate and ecological crisis. With a community of around 30,000 people in the region, the University also takes its leadership role on the race to net zero very seriously and has developed a substantial, evidence-based and award-winning net zero plan. Karime Hassan welcomed Lisa to the team. “It takes everyone working together to arrive at a net zero city. We are supported by and connected to a wealth of expertise via our board members that reach across every part of Exeter and we are delighted to have the full support of the University of Exeter.” 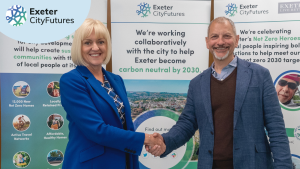 “I am delighted to join the Exeter City Futures Board to support the city to become Net Zero. Exeter is home to the UK’s top five most influential climate scientists – all in the top 21 in the world – and the University has over 1000 research and education specialists working on the environment and climate. The decade ahead will be critical to achieve a fair transition to a new low carbon economy and create a more sustainable and healthier way of life for everyone. I believe Exeter can lead the world in creating a greener, prosperous future and I am delighted to be working in partnership with the Exeter City Futures team on Net Zero solutions.”

To represent Devon County Council, Exeter City Futures expect to welcome another new member of the team shortly. Devon County Council has a commitment to net zero by 2030 having declared a climate emergency in 2019. Their strategy makes use of their responsibilities and areas of influence to help tackle climate change, leading winning projects that reduce energy use, encourage active transport and reduce waste. Karime has worked with senior county officers on transformational projects such as integrated care and Wellbeing Exeter through to emergency planning and crisis management.

Other members of the board include Steve Strang at Exeter College and Chris Tidman of the RD&E NHS Trust, who both represent large populations of the city and are successfully working toward similar climate goals and have experience to share. The final member has just been announced as Zion Lights, Councillor and Member Champion for Net Zero Exeter 2030, representing Exeter City Council.

Karime’s describes two challenges for the future: “Whilst the city has seen a significant reduction of its greenhouse gases since 2007, this is mainly a result of the decarbonising of the national grid – emissions from buildings and transport remain stubbornly high in the city and represent the city’s biggest challenges. The city will need tens of thousands of homes to transfer over to air heat pumps and district heat networks.”

“Electric vehicles will need publicly accessible charging facilities to support the change from petrol and diesel engines to electric. Probably the most challenging issue will be reversing the growth of car usage: we will need to support the increase of cycling and walking at an unprecedented pace. All this brings opportunities as well as challenges, from skills and job creation in green construction through to start-up businesses in transport and technology.”

This article first appeared in The Exeter Magazine July/Aug 2022