Towards A Carbon Neutral Exeter Paper

The City Council recently declared a commitment to make the city carbon neutral by 2030, while recognising that Exeter has been playing a role in rising to the critical climate change challenge for some time.

The city already has a world-class reputation in climate and environmental research, and the Council is recognised as a UK pioneer in Passivhaus standards, utilising renewable energy, moving towards an electric vehicle fleet and delivering large-scale district heating networks.

On Tuesday, June 11, the City Council Executive will be asked to set up a special meeting of Place Scrutiny to consider a new report by Exeter City Futures, called Towards A Carbon Neutral Exeter. 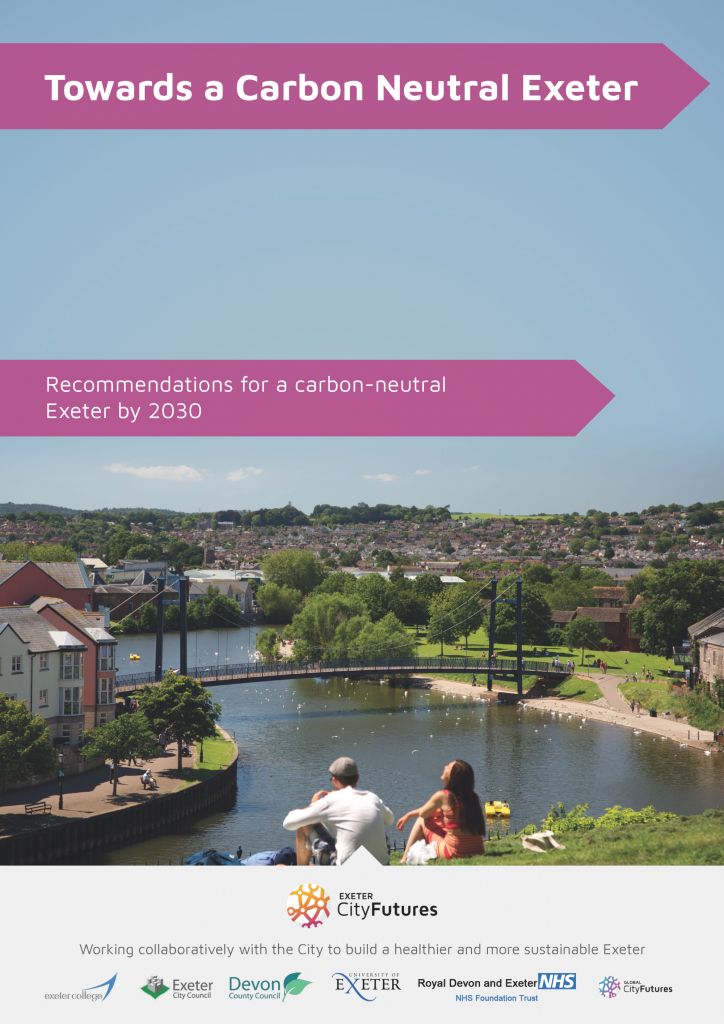 This report provides some key recommendations:

“The Council recognises the scale and urgency of the global challenge from climate change and accepts that cities like Exeter have a duty to act quickly, collectively and concertedly to avoid the worst of the predicted outcomes.

“Cities around the world are setting their sights on becoming carbon neutral, and many, like Exeter, have made commitments to achieve this target. Very few of these cities have to date set out clear, deliverable plans to achieve those targets.

“It is now critical that Exeter defines a clear delivery roadmap that sets out the scale of the challenge and the likely investment required.”

The report highlights that reducing congestion is a key strategic priority in the Council’s Corporate Plan. Decreasing carbon-intensive transportation will play an important role in limiting future emissions.

The City Council’s Corporate Plan proposes that the council works towards our ambition of a city where transport is not a barrier to accessing education, jobs, services or social activities, and where sustainable means of travel are cheaper, quicker and more convenient than private car ownership.

“Bringing this issue to the first meeting of the new Executive demonstrates how important climate change and the environmental agenda is to the council.

“We have much to be proud of in the achievements we have already made in Exeter. But we are well aware of the scale of the challenges ahead, and we are absolutely determined to rise to the challenges, in partnership with others and with the help of everyone in the city.”

“A lot of work has been going on in Exeter for many years to reduce our carbon footprint and energy consumption.

“The public is coming to realise the scale of the issue and the challenges it raises, and we are all going to have to make changes in our lives if we are going to change things.

“In the face of unquestionable evidence about the climate crisis and growing public support for change, we as a city have a duty to act quickly, effectively and most importantly collaboratively to decarbonise and play its role in addressing the global challenge of climate change.”

Exeter has been playing a role in rising to the critical climate change challenge for some time and the City already has a world-class reputation in climate and environmental research.

The Met Office and the University of Exeter inform the international response to climate change every day and Exeter’s Local Industrial Strategy sets out the ambition to be the global leader for addressing the challenges of climate change and urbanisation.

“Exeter has the opportunity to show leadership among cities through decisive implementation of policies, innovations and investment that shape the way we live and our environmental impact for decades to come.”

The full report can be accessed via the link below:

Outcomes from the Emergency Transport Round Table: Green Restart

The Journey to Net Zero Towns and Cities