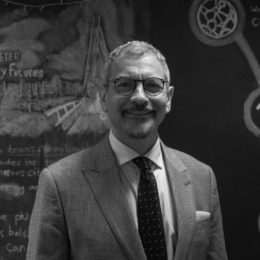 Karime was appointed Chief Executive and Growth Director of Exeter City Council in 2013. He joined Exeter City Council as the Director of Economy and Development in February 2011, following eight years as Corporate Director at East Devon District Council. During his time at East Devon he set up the Exeter and East Devon Growth Point, managed the strategic development proposals for the growth area and established regeneration programmes for Exmouth and Seaton.

Prior to joining East Devon District Council, Karime was Head of Planning Services at Exeter and led on projects such as the award winning Princesshay shopping centre and the relocation of the Met Office.

Exeter is committed to a vision of the future which sees the city as one of the most sustainable in the world. The vision exhibits many of the sustainability features defined by the UN as crucial for cities, and aligns closely to the vision and mission of Global City Futures. Reducing congestion and enhancing mobility is a strategic priority for Exeter City Council, as outlined in the 2018 Corporate Plan. Exeter City Council have created a Programme Director role responsible for delivery of this priority, who is provided as Programme Lead within Exeter City Futures.

“The challenge of getting around Exeter is arguably the biggest practical challenge we currently face as a city, in terms of managing growth and making sure the City remains a great place to live, work in and visit. Exeter City Council is committed to improving traffic congestion and tackling other major urbanisation challenges facing the City. “One of the strategic priorities in our Corporate Plan is to tackle congestion. To deliver this we have partnered with key city stakeholders through Exeter City Futures.” – Karime Hassan – Chief Executive and Growth Director, Exeter City Council.